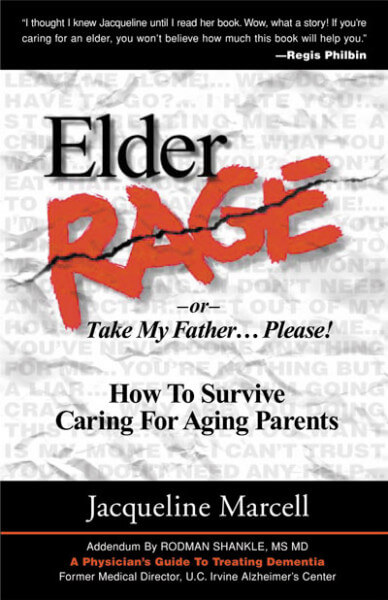 We’ve learned many things through the years as we’ve worked with families. It’s common to talk with family caregivers who have felt very alone and frustrated dealing with the seniors in their lives. Even family who try to educate themselves on aging and disease processes and who are actively involved in caring for their loved ones may feel that no one else understands. These feelings of isolation and frustration can be especially stressful when family caregivers don’t have a straightforward diagnosis of an illness and aren’t equipped to cope with symptoms and changes they are seeing with their loved ones on a daily basis, as we often see with the early stages of dementia.

The Springs at Simpsonville has compiled a list of resources to help family caregivers understand and manage their changing worlds. Jacqueline Marcell’s book Elder Rage . . . or Take My Father, Please!: How to Survive Caring for Aging Parents is on our suggested reading list. Recently, Jacqueline was kind enough to share some of her experiences with us. We hope in reading her story, you’ll find hope if you’re in the midst of caregiving for a family member with dementia.

For eleven years I pleaded with my “challenging” elderly father to allow a caregiver to help him with my ailing mother, but he always insisted on taking care of her himself. Every caregiver I hired soon sighed in exasperation, “Jacqueline, I just can’t work with your father. His temper is impossible to handle and he’s not going to accept help until he’s on his knees himself.”

When my father’s inability to continue to care for my mother nearly resulted in her death, I stepped in despite his loud protests. It was so heart-wrenching as one minute he’d be my loving father and then some trivial little thing would set him off and he’d call me horrible names and throw me out of the house. I took him to several doctors and even a psychiatrist, only to be flabbergasted that he could act completely normal when he needed to.

Finally I stumbled upon a thorough neurologist, specialized in dementia, who put my parents through a battery of blood, neurological, memory tests and P.E.T. scans. After ruling out numerous reversible forms of dementia, such as B-12 and thyroid deficiency, and evaluating their medications, he shocked me with the diagnosis of Stage One Alzheimer’s in both of my parents – something all their other doctors missed.

What I’d been coping with was the beginning of Alzheimer’s, which begins very intermittently and appears to come and go. I didn’t understand that my father was addicted and trapped in his own bad behavior of a lifetime of screaming and yelling to get his way, which was coming out intermittently in spurts of over-the-top irrationality. I also didn’t understand that “demented” does not mean “dumb” (a concept not widely appreciated), and that he was still socially adjusted never to show his “Mr. Hyde” side to anyone outside the family. Conversely, my mother was as sweet and lovely as she’d always been.

Alzheimer’s makes up 60-80% of all dementias and there’s no stopping the progression nor is there yet a cure. However, if identified early there are four FDA approved medications (many more in clinical trials) that in most patients can mask dementia symptoms and keep patients in the early independent stage longer.

Once my parents were treated for the Alzheimer’s, as well as the often-present depression in dementia patients, and then my father’s aggression, I was able to optimize fluid and nutrition with much less resistance. I was also able to manage the rollercoaster of challenging behaviors. Instead of logic and reason, I learned to use distraction and redirection. I capitalized on their long-term memories and instead of arguing the facts, it was best to live in their realities of the moment. I also learned to just go-with-the-flow and let hurtful comments roll off and change the subject. And most importantly, I was able to get my father to accept two wonderful live-in caregivers. Then with the tremendous benefit of Adult Day Health Care five days a week for my parents and a support group for me, everything started to fall into place.

Alzheimer’s disease afflicts more than 5.4 million Americans, but millions go undiagnosed for many years because early warning signs are chalked up to stress and a ‘normal’ part of aging. Since 1 in 6 women and 1 in 11 men are afflicted by age 65, and nearly half by age 85, healthcare professionals of every specialty should know the 10 Warning Signs of Alzheimer’s and educate their patients so everyone can save time, money – and a fortune in Kleenex!

Having “The Talk” With Your Parent (About Driving)

We’re all familiar with “The Talk.” It can be sensitive, uncomfortable, and awkward. You…

Apart But Together: Staying Virtually Connected With Family & Friends

There’s nothing like sharing a good laugh with an old friend, hugging a grandchild,…