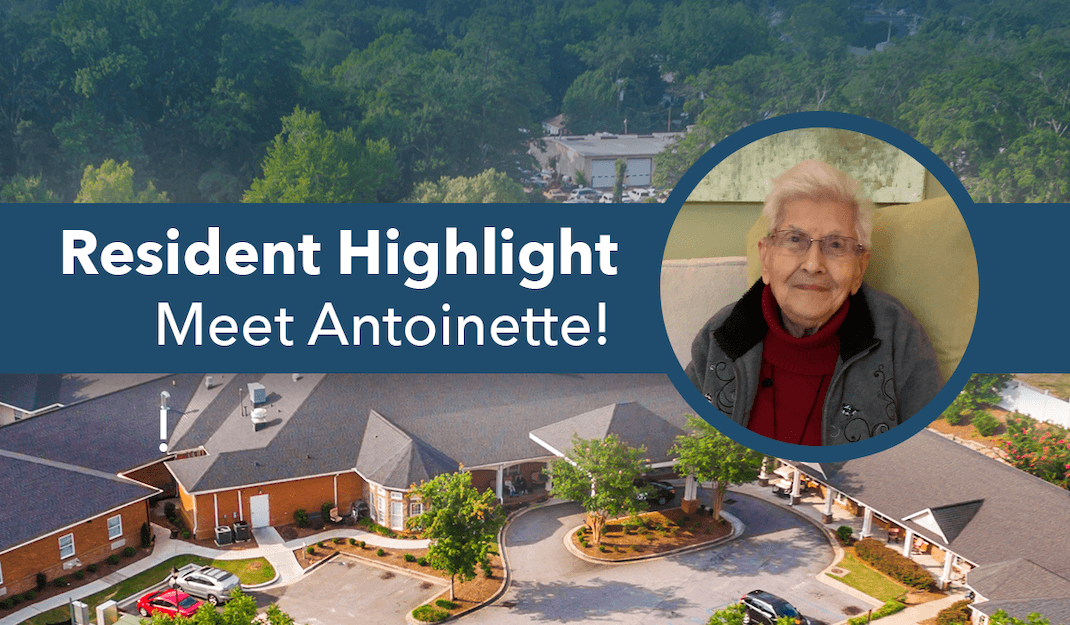 The Springs at Simpsonville June Resident of the Month is Ann! She has lived in our community for over a year, and we’re excited to share her story this month. We want to congratulate Ann and we appreciate her sharing her interesting story with our readers!

Ann was born in 1920, in Brooklyn, New York. There were hardly any modern conveniences at that time – no telephone, central heating, hot running water, or even a refrigerator (an ‘ice box’). She remembers when the newsboy would shout in the early morning hours “morning news and the mirror extra” and she vividly recalls when Lindbergh crossed the Atlantic Ocean in 1927.

The fourth of six siblings, today only she and her younger sister, Anna, survive. Ann was named Maria Antonia after her maternal grandmother but since she already had a sister named Mary and a sister named Anna, they called her Antoinette. Complications began arising after she met her husband, Tony, who gave her the nickname ‘Ann.’ This caused some difficulties as his first Valentine was addressed to Ann and her sister, Anna promptly opened it!

Ann met her husband, Tony, in 1939 through a mutual friend who also sang in the church choir. She was working in Manhattan in the fashion industry, and Tony was working in a cigarette factory. His boss arranged for him to sing on a radio show, The Ted Steele Hour. The Isham Jones band heard him; they were looking for a singer, and that was the beginning of his career.

In 1942, Tony was inducted into the Army and he participated in several Italy invasions as a radioman for an anti-aircraft unit. During this, he also entertained the captains at their parties. One captain arranged for him to audition for the Special Services army show. Tony toured with the show until the war ended in 1945. Ann and Tony married in 1946 and lived in Queens, until moving to Massapequa, New York a few years later.

After the war, Tony competed and won the Arthur Godfrey show, played night clubs, and even had his own TV show, Club 7. He also starred in a Broadway musical, Paint Your Wagon, where he won several awards. After that, Tony continued to do theatre and night clubs, including an appearance on the Ed Sullivan Show and Abbot & Costello! He was also under a recording contract with RCA Victor from 1951-53. Ann traveled alongside him for three years, but it became difficult when they began having children.

After 17 years in show business ‘Tony Bavaar’ gave it up to live a more traditional life. Together, Ann and Tony raised three girls, Patty, Kathy, and Annette. All three daughters have the music bug, with Kathy actively teaching. One of Kathy’s daughters is also following in her grandfather’s footsteps by performing and teaching opera! Ann and Tony moved from state to state for a bit. While living on Long Island, they enjoyed the beach, in North Carolina, they frequented sporting events that their grandsons participated in and while in South Carolina, Ann attended many piano and dance recitals for her granddaughter. They faithfully attended Catholic mass everywhere they resided and enjoyed participating in senior events and Italian Club activities.

After retiring from Tony’s second career in the business world, they relocated to Jamestown, North Carolina, where they would be closer to their eldest daughter, Patty, and her family. After seven happy years, Tony became sick with cancer and passed away.

Ann eventually moved to Greenville, South Carolina to be closer to her youngest daughter, Annette, and her family. Ann lived in her own townhouse for 11 years until she fell and broke her shoulder and wrist severely. After five surgeries and extensive rehab, she moved in with Annette and her family and lived there until she needed additional care following a minor stroke in 2017.

Ann has lived at The Springs at Simpsonville since December 2017 and enjoys the activities and the beautiful property. She routinely receives notes from the caregivers about what a gracious recipient she is and how they enjoy caring for her since she is so appreciative.

We thank Ann for sharing her story with The Springs at Simpsonville and we look forward to seeing her around the community. Once again, we congratulate her on being our June Resident of the Month! If you would like to learn more about our residents and our community, please visit our website!

Alexis Powers – Employee of the Month

The Springs at Simpsonville’s Employee of the Month for June is Alexis Powers! Alexis has…

Summer Rogers – Employee of the Month

Congratulations to Summer Rogers, our June Employee of the Month for The Springs! Summer is…

How to Prepare Seniors for a Winter Storm